The History of the Museum

The History of the Museum of Archaeology and Biblical History

When the Museum officially opened in January 2001, it operated under the auspices of Trinity Southwest University (TSU). In January 2003 The M useum of Archaeology and Biblical History (Museum) was incorporated as a New Mexico nonprofit corporation, and in October of 2003 received its IRS determination letter recognizing the Museum as a separate 501(c) 3 tax exempt public charity. During 2003-04 a gradual transition was begun and officially completed in early 2005, whereby TSU completely relinquished its involvement and transferred the Museum operation to the Museum corporation itself. In May 2005 a new board of directors was elected, and since that time has solidified its Mission, developed a vision, and put into place a plan for the continued growth and expansion of The Museum of Archaeology and Biblical History and the realization of its Mission. Late in 2005 the Museum joined forces with The Institute for Near Eastern Archaeology whereby they provided their collection to be viewed alongside of ours.  Unfortunately in late 2008 TSU had to sell its facility where the Museum was being housed and operated for over 8 years and subsequently had to close its operation and place all artifacts into permanent storage where they remain to this date.Museum Collection

MABH’s collection is both unique and rare owning some of the finest biblically related artifacts found anywhere in the world.  The uniqueness because each artifact has a story associated with it, how it was added to the collection, circumstances surrounding its provenance and acquisition and its relationship to the biblical narrative. Each piece has been individually selected to augment or complete a particular section of history so to provide a comprehensive archaeological record for that period of time.   The collection is more extensive than the current Near Eastern collection at the Smithsonian in Washington D.C. The expression the whole is greater the sum of the its parts is more than true in our case.  Even though we have individual pieces that are priceless taken all together the clear unified message of the extensive archaeological support for the biblical narrative is staggering. The museum’s collection now approaching nearly 1,000 pieces of Middle Eastern artifacts is the combination of two collections; the collection of The Institute for Near Eastern Archaeology (INEA) and The Lamb Foundation for Research and Religious Studies (LAMB). INEA and its founder George Sparks, made its first acquisition over 20 years ago in 1993 of a Shekel of Tyre from Mr. Herb Streans an antiquities collector from Boston. In 1995 INEA made it first major collection purchase of 120 lamps from Mr. David Hendin. The oldest piece in the collection is a handmade terracotta jug with a white slip red net design found at an ancient cemetery on the east side of the Dead Sea dating back to 3,200 to 2,800 BCE which is about 500 years older than the great pyramid of Giza. On John E. Mancini’s first trip to Israel in 1998 the founder of the LAMB Foundation acquired 3 coins (a Shekel of Israel dated year one of the Jewish Revolt 66-CE minted in Jerusalem, along with a Shekel of Tyre an a Tiberius Denarius) from Maher Aweidah an antiquities dealer in the old city of Jerusalem right off the Via de la Rossa. To date we believe we have one of the largest ancient lamp collections in the world if not the largest comprising more than 250 lamps. Weapons, Coins, Cosmetics, Funerary, Ostracons, Inscriptions, artifacts from ancient kingdoms of the  Persians, Akadians, Ur, Sumerians, Babylonians, Egyptians,  Israelites, Romans, Grecians.     We have pieces from every major archaeological period Neolithic, Chalcolithic, Bronze, Iron, Hellenistic, Roman, Byzantine of the near east. We have only a few pieces presented on our web site highlighting our collection.

The Museum of Tomorrow

The Museum of Archaeology & Biblical History

We foresee this  facility becoming the World Center of all Biblicallv related Archaeological work and HOME for the worlds most prized Biblical Archaeological Treasures.

We see a two phase process in the Museum development:

First:To once again revive the Museum of Archaeology & Biblical History and build a smaller version of the larger version in Albuquerque New Mexico to present archaeological artifacts in such a way as to support the historical authenticity of the Biblical Narrative. 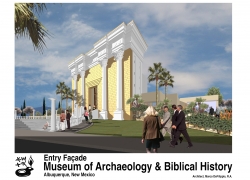 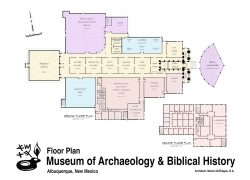 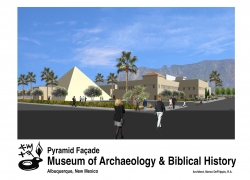 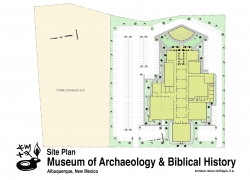