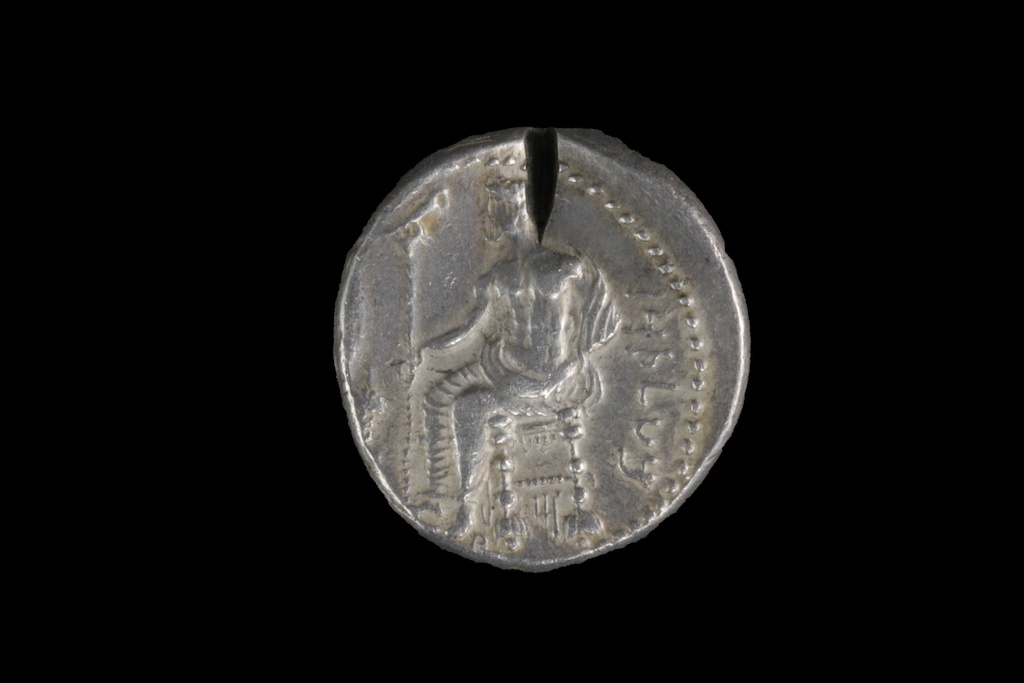 Persian Period 539-332BCE
Obverse: Baal seated to the left, his name Ba’altarz in Aramaic
Reverse: two lines of turreted city walls with lion killing a bull, above in Aramaic “Mazaeus who is over beyond the river” and Cilicic. Possibly this coin is depicting the walls of Jerusalem.
Hendin 450
Jerusalem’s walls on a coin of Mazaeus
A coin struck in Tarsus in Cilicic in the mid fourth century BCE carries a descriptive phrase “… Beyond the River” that was used in two books of the Old Testament. Codified at about the time this coin was issued.
The phrase appears on the coin in Aramaic both the official language of the Persian Empire at the time as well as the colloquial language in the land of Israel. Is it an accident that this Biblical phrase shows up on a coin or is it of any significance? This coin also displays a set of classic city walls. It may be possible that these walls are the only depiction of the city walls of Jerusalem rebuilt by Nehemiah as related in the Books of Ezar and Nehemiah. “…Beyond the River”, Eber Nahara, is the Aramaic or Hebrew phrase the Tarsus silver coin (stater) and the Old Testament have in common. “Mazaeus who is over Beyond the River and Cilcica”.
It is also worth mentioning that a number of Cilician coins including coins of Tarsus were copied by the Samarians in the fourth century BCE. At least fifteen different coins have Cilicia prototypes. An abbreviation of the name “Sanballat” referring to an heir of Nehemiah’s Sanballat appears on several Samarian coins contemporary with Mazaeus.
Ezra 4:20